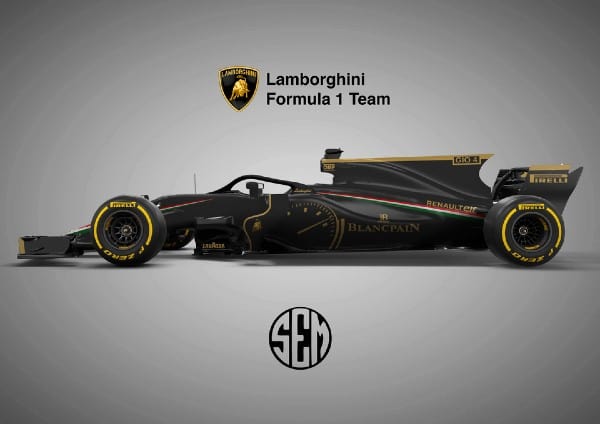 As a fan of Formula 1 for the last 30 years or so I’ve enjoyed watching the technical advancements these machines have made since the raw, open-cockpit risks involved in driving F1 cars of the 1960s. Pretty much most of the larger car manufacturers have had a presence in F1 at some point but Lamborghini has chosen, for whatever reason, to not take part.

As a Lamborghini ‘fan’ this is a disappointment but is there a good reason behind this and could things change in the future? This is what I set out to establish and my findings are below.

Will Lamborghini join F1? It is unlikely that Lamborghini will join Formula 1 in the short term. Lamborghini is owned by VW Group and it seems that the financial and reputational risks involved are too high, at least at the moment.

Has Lamborghini ever raced in Formula 1?

You may be surprised to hear that yes, Lamborghini has competed in F1 previously, in a way…

Back in 1987, the car manufacturer Chrysler had bought Lamborghini and wanted them to enter into Formula 1. A new company called Lamborghini Engineering was created and was tasked to create a new 3.5-liter V12 engine which was to be made ready for the 1989 season.

In 1988, Lamborghini Engineering made the announcement that they would be supplying the engines to the Larrousse-Calmels F1 team for the ’89 season. It was a difficult year for them but steady progress was made throughout. At the latter part of the year, a deal was struck with Team Lotus to supply them with the engine to compete in the 1990 season.

In 1992, the same engine was provided to Larrousse and Minardi however, due to Lamborghini reducing its production, it could no longer afford the expensive costs associated with F1. Chrysler then re-labeled the engines under their own name.

In the latter part of 1993, Chrysler sold Lamborghini to Megatech (an Indonesian company) and the Formula 1 development was canceled. From this point onwards, Lamborghini has not appeared in any form in F1.

Do other supercar manufacturers race in Formula1?

Yes, there are a couple of other supercar manufacturers that have appeared regularly in Formula 1, details below:

Other supercar manufacturers have had a role in F1 in the past:

Why haven’t Lamborghini competed in Formula 1?

Well, we know they’ve competed in the past (providing an engine, at least) but why not now? To be able to answer this question we need to look at the ownership of Lamborghini. This is not an independent company anymore – in fact, it has been this way for some time.

There have been rumors recently that Lamborghini may make a return to F1 at some point soon so is there any truth to this? Well, yes and no.

The rumors were justified as Stefano Domenicali (the current CEO of Lamborghini) has been involved in F1 meetings, relatively recently, representing the VW Group. However, he appears to have played down these rumors by talking about the cost of participating in Formula 1, not to even be competitive but just to compete!

The costs are indeed high and we’ll look at these below. Stefano then went on to say that Lamborghini needs to invest in other priorities.

So, Lamborghini hasn’t competed in Formula 1 in the past due to other priorities and I think it’s fair to say that the financial investment involved and the reputational and financial risk to poor performance is too much for VW Group to absorb at the moment.

How much does it cost to race in Formula 1?

It’s not cheap. Indeed, the entry fee alone is over $500,000 but that’s only the start of it. On top of this is another fee which is dependent on where the team finished in the previous season.

The amount the teams pay is dependent on the number of points they won the previous season and this is calculated at over $6,500 per point for the current champion (Mercedes) but then almost $5,500 per point for every other team. The entry fees for the 2019 season are approximated below:

The above is just to participate but how much each team spends on developing a car and either building your own engine or buying a contract for an engine from another manufacturer is hard to estimate but I think we can assume several million. Imagine spending all that money and then having a really disappointing season with several break-downs. Apart from financial loss, it could easily impact reputation also.

Will Lamborghini ever race in Formula 1?

With everything in mind but most importantly, considering what the CEO Stefano Domenicali has recently said, it seems at least in the short-term, there is no appetite within VW Group to participate in Formula 1. Will they play a part in the future of F1?

Well, it’s possible but of course, it’s not up to Lamborghini itself but VW Group. Personally, I don’t think we’ll see them in at least the next 10 years or so.

Lamborghini itself are doing okay and the cars they are producing are still well-loved and selling well. They don’t need to participate in Formula 1. However, would I like to see them participate and even challenge for the title? You bet I would…

Will Lamborghini ever race in the IndyCar series?

Only Honda and Chevrolet currently provide engines for the IndyCar series currently. In fact, we have to go back to 2003 when any other manufacturer won it (Toyota). Occasionally you do get other manufacturers (such as Lotus in 2012) but this is rare.

I do not see VW Group (and therefore Lamborghini) showing any interest in the IndyCar series for the foreseeable future.

It was interesting to do a bit of research into this and I actually wasn’t aware of Lamborghini’s involvement at all in Formula 1 in the late 1980s and early 1990s. It’s a double-edged sword being tied to a parent company.

On the plus side, Lamborghini has done very well out of utilizing the power-train from Audi (and some of their electronics) – increasing reliability. However, when a manufacturer such as Lambo wants to make a decision such as this, it doesn’t just impact them.

Their parent is Audi and they are ultimately owned by the VW Group and although they certainly have the funds they don’t (at least at the moment) have an appetite for Formula 1. Hopefully, one day they will but I won’t be holding my breath!