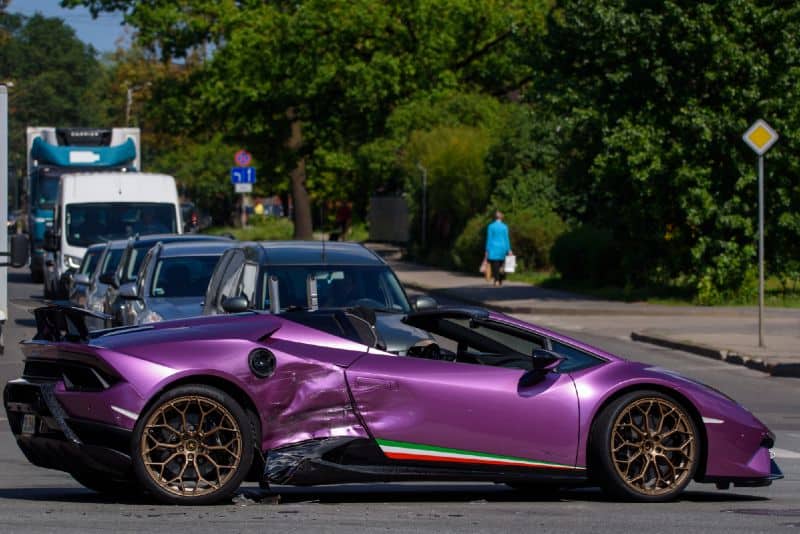 A lot of people must wonder what the big deal is with supercars. Every time they see a video of one it seems to be losing control, spinning out, crashing or in the news for some other reason! Why is this?

Do supercars handle so differently than conventional cars that it takes a professional racing driver to keep them in check? Or, maybe the drivers of these cars are just the type to push them too far and the inevitable then happens? Let’s find out.

Losing control of a supercar is down to the driver in the majority of cases and not the car itself. Although they have a lot more power than conventional cars, it is the driver that chooses to disable built-in safety controls and becomes over-confident with their abilities.

What makes a car this special? What exactly is the difference between your conventional car and a supercar? Well, apart from the price – there are many differences.

Firstly, supercars are constructed in a different way from your average car. They are typically hand-built, using lighter, stronger, more expensive components. Attention to detail is key.

Then, there’s the performance. You wouldn’t buy a supercar that had a performance your average $10k car could compete with! Well, actually this is an interesting one as the performance of many cars has increased almost beyond recognition in the last 10 to 20 years. You have electric cars that can leave Lamborghinis standing at a fifth of the price.

What these normal cars don’t usually have though is the sound and the feel you get through your pants when driving. These electric cars may well have some incredible 0-60 times but what they will never give you is the feeling you get when your screaming V12 is roaring only a foot or so behind your head.

Then, there are the looks. You should be able to identify a supercar not by its numbers on a data sheet but how it looks. Normal cars just don’t look like Ferraris or Lamborghinis. My point is, a supercar is not just any one of these things – it needs to be all of them!

Why Do Supercars Spin Out So Easily?

Supercars don’t spin out easily – in fact, they have more electronics in them usually that prevent that than your typical car. They need to have these controls as there’s so much power available to the driver. Without stability/traction controls for instance, every time you planted your right foot your wheels would spin and you’d most likely lose control!

So, the safety controls are designed to still deliver maximum power to the driver when required, but in a controlled way.

The problems can come about when drivers switch these safety controls off! Usually, this is because they think they are a better driver than they actually are. The trouble is, unless you’ve experienced these cars in a controlled environment (like a track) you can’t possibly know what your limits are. The one thing you don’t want to happen is to discover these limits when you’re traveling around a tight corner at 70mph!

Your average driver will never be able to reach the limits the car can produce. I think in my two years of Lambo ownership I’ve not reached the full potential of the car once. I certainly don’t want to discover the car’s (or my) limit on the open road with other people and cars around.

So, the problem is not with the supercar – it’s with the driver, which brings me nicely on to the next section.

It’s All About The Driver

It doesn’t matter whether you have a Pagani Zonda, Lamborghini Countach, Ferrari LaFerrari or an early Porsche 911S (sometimes referred to as the ‘widowmaker’). They are all completely safe cars to drive and won’t, for no reason, just spin-off the road into a tree and burst into flames!

The problem is what sits behind the steering wheel! With so much power available and with (usually) fantastic handling, it’s easy to become over-confident with these things. A corner that you took easily the day before might have developed a pot-hole or become slippy after some overnight rain. The variables change and all of a sudden your car isn’t behaving the same as it did previously.

It’s then that the lack of experience and knowledge shows. Without any kind of driver training, recovering your car (any car) once you start to encounter oversteer or understeer quickly becomes a lottery. You may instinctively take your foot off the throttle and slam down on the brake, which may be the worst thing you could do in this situation.

This is another thing you should consider as it is much more newsworthy when a high-end supercar leaves the road and crashes than when a regular car does it. The truth is, cars lose control all the time – however, that’s not going to sell any more copies of a paper or make people talk if it was to appears on the local news channel.

However, if a $2m Bugatti Cheron was snapped (or even better, recorded) crashing off a road then that will get people talking!

So, you are more likely to hear about (and remember) when a supercar loses control and crashes than when other cars do it. Usually, it is along the lines of ‘Idiot Wrecks Expensive Car Whilst Showing Off’ – because it gets people’s attention and has more chance of going ‘viral’.

Conclusion – why do supercars lose control?

Hopefully, as you can see – supercars don’t lose control any more than any other car. It’s just that when they do we hear about it as it’s deemed newsworthy! Another contributing factor is when experienced drivers (who have a lot of money) become over-confident with the car and then don’t know what to do when the car gets out of shape.