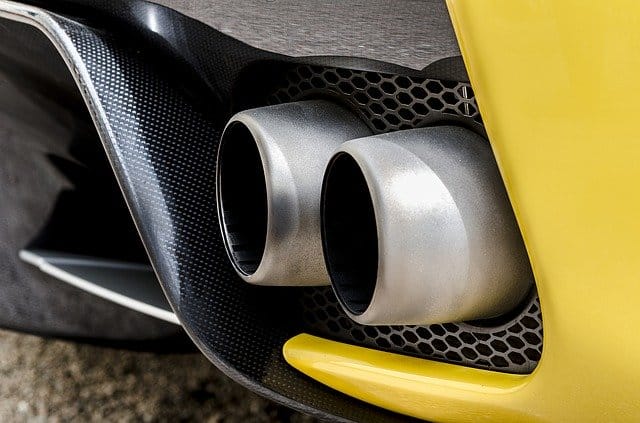 A supercar comprises many components and the things that turn your regular exotic car into something special may be different to each and every one of us. For instance, raw power or handling? Sleek aerodynamic looks or do you prefer a muscle car?

These things are indeed all important but the one thing that absolutely has to be in place for me – is the sound. Yes, some of the more recent electric cars may blow many supercars out of the water but without a good sound? No thanks, I’m sure they’re great but they are also not for me. So, give me a supercar with a good soundtrack, please!

The Lamborghini Aventador SVJ is, in my opinion, the best sounding supercar in production today. The SVJ’s naturally aspirated screaming V12 that sits inches behind you will put a smile on your face so big, on-lookers will wonder what you’re up to in the cabin!

What Makes A Car Sound Good?

Answering a question like this is always going to be contentious. Everyone has an opinion and there are going to be some of us who prefer the distinctive low grumble of the American heavyweights and many who prefer the screaming Ferrari V12. There are, I’m sure, many others who think the ideal supercar won’t make any sound at all from its engine – so there’s no way I’m going to please everyone!

However, what I believe makes a car sound good is a combination of the engine and its exhaust. The engine will ideally be high revving and large in capacity.

The exhaust must complement the engine and it would be easy for me to go a little off-piste by selecting a car that has a non-standard exhaust. The pops and bangs that you get when lifting off, all add to the overall package. Admittedly, there are several available which can really enhance the note of your exotic but that’s not what I want to do here – I’m looking (listening) at the stock package.

Why Does The Aventador SVJ Sound So Good?

The LP770-4S SVJ, as it is also known, is arguably the ultimate (and I think last) of the Aventador iterations. Indeed, the SVJ could be the last production V12 that Lamborghini ever make. It looks likely that their next top-of-the-line marque may succumb to the hybrid line, as so many others are.

The 6.5 liter V12 engine produces 566 kW, 759 hp and will rev until the red line is reached somewhere around 8,500 rpm. Accelerating from a stand-still to 62 mph will take you just 2.8 seconds. Which is about the time it would have taken you to read that last sentence. By now, it will have stopped again!

What makes Lamborghini’s L539 V12 engine stand-out for me is that it is an engine for connoisseurs. The low-level bassy rumble combined with the distinctive top-end V12 scream that only those of us that remember the ‘good-days’ of F1 back in the 80’s will recall.

How Is the Aventador SVJ Different To The Standard Aventador?

The Lamborghini Aventador SVJ is a more track-focused Aventador but one that can still be (relatively) comfortably driven on the road (choose your seats wisely). There are weight savings over the previous model and also an increase in power (as if that was needed).

This car sounds phenomenal, most likely down to the use of lighter material (carbon fiber and titanium) in the exhaust. A lighter exhaust will make a different sound, more high-pitched and angrier.

What Makes The V12 Sound So Good?

So, what makes the glorious V12 lump sound so much better than its smaller cousins? The V12, in case you didn’t know, consists of 12 cylinders which are mounted in a V-shape, with 6 on each side of the ‘V’. These engines aren’t anything new though and indeed were used in many aircraft during World War II.

The V12 engine typically delivers its power in a silky smooth fashion and allows a freer running, higher-revving power train. It’s also not known for being quiet! The V12 engine is loud and there will be nowhere for you to hide and don’t expect to see decent economy figures, not that you should be surprised about that.

Do All Lamborghinis Sound This Good?

If, for instance, we look at the V10 on Gallardo’s then this is a good example. The first generation of the V10 (before it became the LP560 in 2008) had a very high-revving, F1-esque engine note that sounds fantastic. The LP V10’s though had a slightly different version of the V10 and this produces a different sound. Although you certainly aren’t going to say the noise is unpleasant – because it isn’t, it certainly doesn’t scream as much as the old version!

So, all Lamborghini’s sound good (yes, probably even the original tractors) but some certainly sound better than others and those ‘others’ are most definitely of the V12 variety!

It would be pretty pointless having an article about a great-sounding car without some actual examples, right? So many people modify their SVJ that it’s not easy to find many examples of a standard one, but check this out:

I have to include this next one, below. I believe this next example has a straight-through exhaust but you just have to love those flames!

…and to think this could be the last ever Lamborghini that can generate sound like this perhaps makes it even more special. I think future ones may well have to have artificially generated cabin noise to re-create anything like this and that’s just not for me. I know that a lot of us are becoming more and more Earth-Friendly these days, and that’s great. However, there’s always going to be room for something loud and firey coming out of the back of my car!

Other Examples Of Great Sounding Supercars

Oh, there are so many to choose from! The Ferrari 458 has always had a special place in my heart and one day I’m determined to buy one. Combine a 458 with a tunnel – and what you get is this:

The next one (below) maybe a few years old now but the Lamborghini Murciélago has a V12 that screams like they all should!

Conclusion – which supercar has the best sound?

Well, as I’m sure we all now agree (joke) the Lamborghini Aventador SVJ is the best sounding supercar in existence. You know, it’s funny when you talk about this kind of stuff with other petrolheads. Everyone has an opinion and everyone thinks they are right. Which is great, what a boring world it would be if we all owned the same car, right?