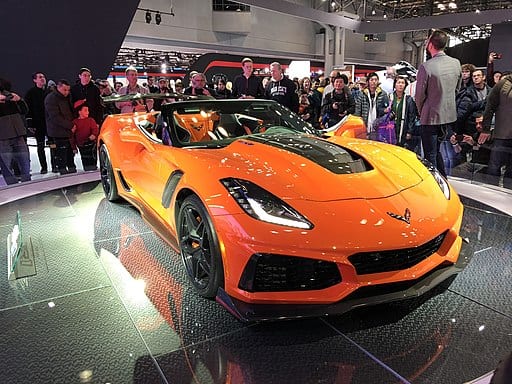 I sometimes wonder where it will end. Having production road-going cars that are capable of over 200 mph is, when you think about it, not very useful. I don’t know about you but I rarely go higher than 150 mph when I’m going to the hardware store.

Joking aside, when do any of us really utilize these high speeds? Perhaps it would make a tiny amount of sense if we lived in Germany and traveled on their glorious autobahns!

But alas, we are not so fortunate. However, just because we can’t achieve these speeds on our roads, doesn’t mean we don’t want the capability just in case.

The Corvette ZR1 is the fastest Corvette in 2021 and will be for 2022. It has a top speed of 212 mph and a 0-60 mph time of just 2.85 seconds! The top speed and acceleration aren’t the only things that will take your breath away about this car though.

The fastest of the Corvette’s

Ok, so we know the Corvette ZR1 is the fastest – that was easy to ascertain. But actually, there are several that have been starting to push those boundaries for a while now.

I’m not going to bore you by giving you a history of Chevrolet and that the first Corvette was in the early 1950’s – most of us know this kind of stuff already. If you don’t – hang your head in shame, this kind of knowledge should be in the Petrolheads Bible.

Whatever that is, I just made it up. Anyway, if it existed – this bit of knowledge would be included.

We’re now on the eighth generation of Corvette. Look at the previous incarnations, the C7 – it wasn’t exactly sedentary. With a top speed of around 185 mph and a 0-60 mph time of 3.7 seconds it was (and is) up there with the very best.

The ZR1s stats speak for themselves, and here they are for you to consume and drool over. In fact, they don’t just speak for themselves – they scream out from the top of the tallest skyscraper in Kentucky. These are some big numbers. Well, almost all of them – apart from the 0-60 mph time and….the price! More on this later though.

Is the Corvette ZR1 a supercar?

I guess I could have just left that there but I should probably quantify things, just a little. People define supercars in different ways. For some, merely the badge is enough. Stick a prancing horse on a shopping trolley and it instantly becomes a supercar.

Alternatively, some people classify a supercar purely on its specs. What is its v-max? How long does it take to get there and so on… But then you could modify a Honda Civic and it could meet these criteria, so maybe not.

For me, it’s a combination. Firstly, and arguably the most important component – it needs to look the part. This is the reason why I’ve struggled with Tesla. They are attractive in so many ways – but not aesthetically, at least in my opinion. Couldn’t they have made them look less…normal?

Anyway, once you’ve ticked the ‘looking good’ box, you can move on to the performance. You have to factor in the manufacturer here also, sorry but I just don’t think I could get my head around a Lada ever being a supercar! Should the cost of the car be a contributing factor to its status of ‘supercar’? Well, yes – but maybe not for the reason you’re thinking.

You see, if everyone owned a supercar then they would certainly lose some of their exclusive appeal. I for one would hate this. Not that I wouldn’t want everyone to own but, just that I like to aspire to one day being able to own the next great thing – if they all cost $5k then it would hardly be a dream. So, the car needs to be expensive enough to ensure that not everyone has easy access to one.

The Corvette ZR1 ticks all of these boxes.

Is the Corvette ZR1 street-legal?

The Corvette ZR1 is street legal, yes. It’s a good question though as there are indeed several cars that are legal in some parts of the world but not others. These are mainly European in origin and for whatever reason, aren’t permitted in the US. This is usually down to the differences in safety regulations.

This isn’t a new thing and the obvious example that comes to mind is the classic Lamborghini Countach that set the supercar world on a new direction in the 1980s.

In Europe, the car had slick lines and could be mistaken for breaking the speed limit when stationary. In the US, it had a big fat bumper stuck onto the front – somewhat diminishing its Italian styling.

Fortunately, with the Corvette being made in the US of A, there are no such restrictions or concerns.

What engine is in the Corvette ZR1?

The Corvette ZR1 is equipped with a 6.2 liter, hand-made supercharged V8. This small block ensures that not only does the ZR1 look the part, but it also acts the part too.

Whereas many manufactures are going in a different direction, for instance, McLaren with their 3.8 liter twin-turbo that’s found in many of their new cars and others are going towards hybrid. It’s refreshing (at least to me) that Chevrolet are sticking to what they know works – and that means a big, shouty engine!

Why is the Corvette ZR1 so fast?

There are primarily three things that determine how fast a car is.

Actually, it’s primarily the first two points that have the biggest impact- the aerodynamics are relevant but only at higher speeds. The reason why the Chevrolet is so fast is simply that it achieves these points. It has an exceptionally powerful engine, it’s not exactly as light as a Lotus but it’s light enough and it has a massive wing on the back.

How much is the Corvette ZR1?

Could the price of the Corvette ZR1 be its Achilles heel? The one thing that lets it down? Well…no. In fact, just the opposite. Whereas for the flagship Lambo or Ferrari you may be looking at $350,000+ the Corvette ZR1 starts at an impossibly low $123,000 ($5k more for the convertible).

Okay, I know this is still a lot of money, but just look at what you get for that, and whilst you’re at it, do some comparisons against its European rivals. Ok, so you can add a bit of money when you spec it how you like.

However, when I spec’d mine exactly how I wanted it, it only came to a little under $143k – which is still relatively cheap!

So, the Corvette ZR1 is the fastest Corvette, so far. It’s also ridiculously cheap considering the power and performance it gives you and how much it will cost you.

Anyone who is currently looking at buying a supercar will have to consider this. If you’ like to take a look at the Corvette configurator – check out the article (opens in a new window).

Finally, anyone who buys a supercar (especially a new supercar) needs to understand depreciation. If you’re wondering how much supercars depreciate – check out my article and learn the truth before you jump in!