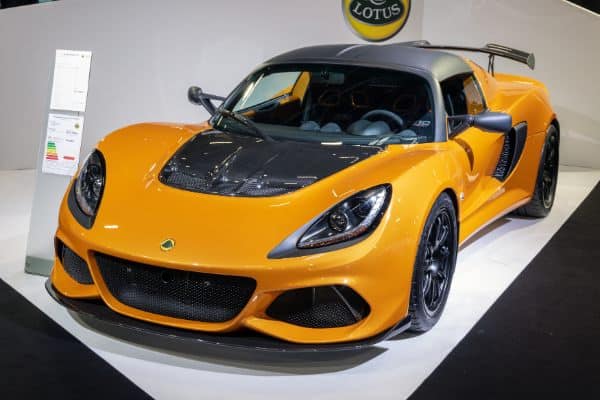 Without knowing much about the two different cars it would be understandable to get the Lotus Elise and Exige confused with each other. They are, after all, both roughly the same wheel-base, quite low to the ground and have many similar styling similarities.

When you start to learn the differences between the two cars, both aesthetically and in regards to performance, you will realize that actually, these are two quite different cars aimed at two different types of people.

Lotus is a British-based sports car company who are now owned by the Chinese company Geely. Lotus was originally owned by (of course) Colin Chapman who founded the company in 1952. As far as their sports cars are concerned, they are perhaps best known for producing light-weight cars with particularly good handling. This emphasis on light-weight and performance has always been the backbone of everything Lotus has produced.

Yes, the interiors of some of these cars may seem a bit basic, but the interior luxury is not the reason why you buy a Lotus. They are drivers cars. They are cars for people more interested in how the car feels on the road than how many flashing lights and gadgets you can fit inside the cabin.

I think I will always remember my first Lotus (pic below) – it was my first ‘decent’ car and was acquired just before the turn of the century. I remember going into the garage looking to originally buy the Lotus Elan but the salesman somehow convinced me that with a finance deal I could then ‘afford’ the Elise S1. I think he could have offered me any finance package that day and I would have accepted it after seeing the Deep Purple example that was soon to become my own.

The roof leaked. I used to get into it the morning after it rained overnight and there was a puddle in the drivers well. It was difficult to get in and out due to the chassis design. The radio didn’t work properly and the engine felt a little under-powered. None of this mattered though. It was low to the ground, felt like you were doing 100 when you were doing 50 and handling was as good as you’d expect.

Build quality has improved these days and manufacturers can’t get away with the things people could class as ‘quaint’ 20 years ago. Nowadays, Lotus offers arguably, the ultimate drivers cars.

The Lotus Elise has been around for probably longer than you think. You may be surprised to hear that it was first released in 1996 and there really aren’t many sports cars that have been in production for almost 25 years. Of course, there have been many variations of the car during that time.

In 1998 the Series 1 was produced, followed by the Series 2 in 2000 which included a major overhaul, partly due to new European regulations. The Series 3 arrived in 2010 but at first glance, there’s not really much difference between the Series 2 and Series 3.

The Elise though is essentially a two-seater, mid-engined, rear-wheel-drive sports car. It is lightweight (the original S1 weighed in at just 755 Kg!) and has a strong emphasis on driver-engagement. Having had three Elise’s myself, I can most certainly vouch for this.

There really isn’t much like the Elise on the road. You sit low on the ground and the feedback you get from the steering wheel is astonishing. You can feel every nuance on the road surface and the closest you can get to the feeling is to probably sit yourself in a go-kart!

The Lotus Elise (and the Exige) are probably the ultimate track-day car that you can comfortably drive to the track itself in. Yes, you might get a little more feedback from a Caterham 7 or an Ariel Atom, but the Lotus is more rounded – you can enjoy yourself both on the track and most definitely off it.

The Lotus Exige is fundamentally a more hard-core, raw version of the Lotus Elise. Like the Elise, the Exige has been around for a long time also (since 2000), and also like the Elise, there have been many models since that time including 3 major Series lines.

Although the Elise and Exige used to share the same engine, the Exige now has its own V6 variant since the Series 3 from 2012.

The Exige has always been the more aggressive of the two Lotus brothers and the S1 Exige felt more like a track-focused car than a road car. I remember having a passenger ride on a track-day in one and it appeared quite difficult to drive.

Great once mastered but not a lot of torque and you had to keep the revs high to get the most of it. I liked this though as it made it different from other cars and made you feel like you were driving something a bit special – which you were!

Differences Between the Elise and Exige

The Lotus Elise and Exige share many things, including the same chassis but there are many subtle differences that you may not first realize, we take a look at the major points below. As there have been many variants, I’m grouping them via the different Series models and generally ignoring the purely track-focused models.

The Lotus Elise Series 2 brought noticeable changes to the appearance of both the Elise and the Exige but also saw many other improvements.

As you can see from the above, there are numerous different versions of both the Elise and the Exige spanning around 25 years so it’s actually quite difficult to compare like for like. However, what we can say is that the Lotus Exige is a more track-focused version of the Elise.

It has a more aggressive stance to it and with its rear wing provides significantly more downforce than the Elise. It doesn’t just stop with the looks though as the Exige is more powerful than the Elise and this is much more noticeable in the Series 3 than the Series 1.

Both cars are awesome, there’s no escaping that. They are though for a certain type of person. A person who doesn’t need the cockpit of their car to look like the interior of some spaceship from the future. They are designed for the person who puts more emphasis on the driving experience than the aesthetics. Lotus do what they do very well and I for one, hope they continue down this road for the foreseeable future!