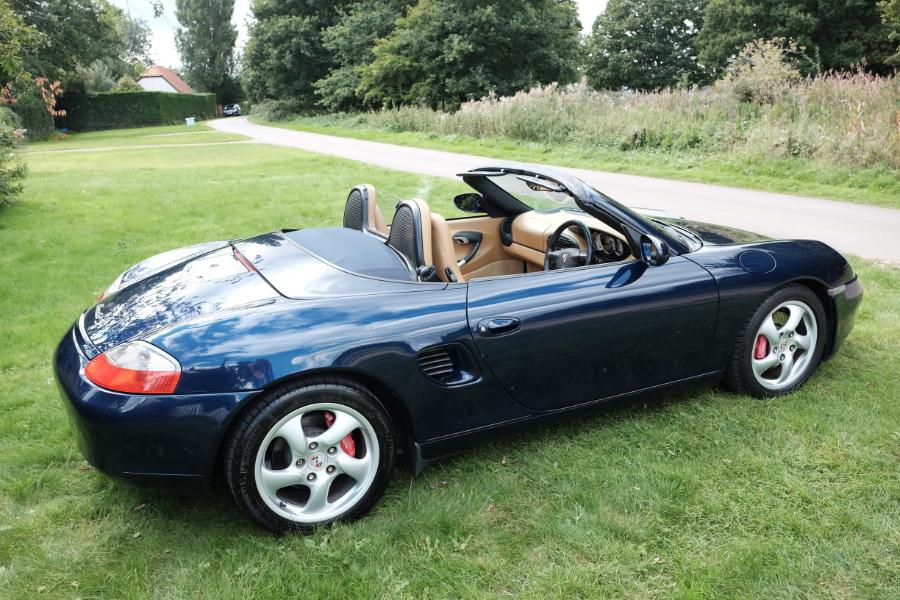 The Porsche Boxster is a mid-engined, two-seater roadster manufactured by Porsche between 1996 and 2004. Initially launched with a 2.5-liter engine, in 2000 this was upgraded to provide an option for either a 2.7-liter or a 3.2-liter engine (in the Boxster S model).

The Boxster is arguably the most affordable Porsche at the moment and for what you can actually get for your money makes it astonishing value. Like any car though, it’s not without its problems and I’ll go through these below (I owned the 3.2S myself quite recently for a number of years). Despite these issues, is the Boxster’s value going to increase in the years to come and what does the future have in store for it?

Is the Porsche Boxster a future classic? The Porsche Boxster may well become a classic in the future. The 3.2-liter Boxster S is the one to choose and can be acquired at the moment for not much money. Be aware of its known problems though, detailed below.

What makes a classic car?

Firstly, the definition of a ‘classic car’ is different throughout the world. For some people, the word ‘classic’ has very specific parameters, such as post WW2 but before the 1980s – anything outside this? Nope, doesn’t count. For other people, there are no pre-defined parameters and a classic car is anything that’s ‘a bit’ old and has some something a little special about it.

For the sake of this article and also as it ties in with my belief, we are going to opt for the latter opinion. What I’m calling a ‘classic car’ is a car that’s not currently in production, had a relatively limited run, had some good qualities and will also see their value increase over the years.

Some examples of classic cars currently and for the future would be:

I could go on. There are literally dozens and dozens of cars that are now considered to be a classic. It doesn’t have to be a car that is absolutely perfect. For instance, the roof on the Elise S1 leaks. Some of the early 911’s suffered from rust problems and the Lamborghini Miura had silly eyelashes above its headlights. These things can actually help to give it ‘classic’ status as it’s a bit ‘quirky’ 🙂

Which version of the Porsche Boxster is best?

To determine which model would most likely make the best candidate for ‘classic’ status, you should find a compromise between the model with the least made and the best performing. For me, there is only one candidate and that’s the 3.2 Boxster S with the manual transmission.

This version is quicker than the other versions and faster – it has a 0-60 of 5.7 seconds (compared to 6.4 seconds for the Tiptronic S version) and a top speed of 164 mph (slightly faster than the Tiptronic at 160 mph).

This Boxster S is (perhaps predictably) the fastest of all the Boxster models. It’s also the angriest. If you get an opportunity to drive one, do so. You see, for me, it wasn’t the sturdy German engineering or its classic looks that made me fall for it…it was the sound.

Above about 3,000 rpm it starts to growl like a very annoyed, angry thing. The growl turns into a bit of a scream as the revs increase and before you know it you’re doing speeds that could leave you in a cell overnight with Mr. Big, who’s ‘in’ with the wardens.

But what a car this is. Apart from the noise and the acceleration, the interior doesn’t look dated, as you might expect from a car over 15 years old. In fact, it has an interior that looks nicer than many, more recent supercars (e.g. Lamborghini Gallardo’s dated interior from cars as new as 2014).

The roof mechanism works faultlessly and during my several years of ownership (yes, after driving one I had to get one to add to my collection) I didn’t have a single thing go wrong. In fact, I’d still have it now if I didn’t have to raise a bit of money to afford my next purchase.

Does the Boxster have any known issues?

The Porsche Boxster 986 is known to have some problems but are they genuine and what are the chances of them causing you a problem?

Whenever someone is doing research on a 986 Boxster, they will at some point read all about the IMS being some big problem. These cars (not just the Boxster S but all Boxsters and 911’s between 1997 and 2005) have a higher than average failure rate of the IMS. Unfortunately, due to its design, the bearing has been known to fail which can cause total destruction of the engine. The intermediate shaft has one main purpose and that is to drive the camshafts, of which there are four.

How can you check for potential problems is during oil changes? A sign that the IMS is potentially about to fail is tiny bits of metal and plastic that can be seen in the oil filter during a change.

You can replace the IMS though with one that doesn’t have this defect. A ceramic IMS bearing replacement will cost you about $2,500 (if it fails then a new engine can cost around $20,000!). Most people tend to replace these when they have other work being performed that can help to keep the costs down.

What I find odd about this though is the fact that despite these IMS failures being all over social media with everyone seeming to say that you simply must replace it. Mine wasn’t changed and everyone else who I knew that had one didn’t have theirs changed either and no-one actually knew anyone that actually had one of these failed!

So, I think a lot of it is just social media doing its thing. People reading somewhere that you must get this done and then spreading the word, despite not actually knowing what they’re talking about. My advice would be to get it changed if you can afford it or have other work being performed in that area. Otherwise, just enjoy your car.

My mechanic told me that if I’d kept my 986 for a couple of years more I would’ve had to have spent some money on the suspension. The Boxster is known to have problems with broken coil springs and you can spot this quite easily be looking at how the car sits and whether you’ve noticed a different feeling to cornering at higher speeds.

Also, a knocking sound that appears to come from the wheels is a sign that these will need to be replaced. Expect to pay around $1000-$2000, depending on the problem to have this fixed.

Not exactly a big problem but the plastic window that’s built into the standard convertible roof has a problem where it can basically become clouded and permanently semi-opaque, making it difficult to see through. This happens over time and indeed was present in my one.

There are some other problems that can come up with the Boxster, like any car though. The above are just the more typical ones.

What examples should I avoid?

If you’re looking for a future classic then I would recommend avoiding any model other than the Boxster S 3.2 and also any examples with particularly high mileage and poor service history. It’s really not necessarily on a car like this to have an authorized Porsche stamp in the service book every year. However, what you do want to see is regular servicing and also invoices for all the work it’s had previously. For me, this would be a starting point and if the above wasn’t present, I wouldn’t look any further.

If we use a 2002 Boxster S as an example, try and find an example of one with mileage under 70,000. The bodywork should still be in good condition but you can expect some minor imperfections and some light scratches (that you can have fixed if you like) on a car with this many miles.

How much will a 986 Porsche Boxster cost me?

Whereas older Porsche examples that are air-cooled have seen their values sky-rocket over the last 5 years or so, this has not been the case for the water-cooled variety, such as the 986. At the moment, these cars are affordable to the majority of us but there is a risk in purchase. Although they are relatively cheap to buy, problems, such as the IMS bearing failure can hit you hard. But then, that’s the case with most Porsche’s.

I’ve been watching the prices of 986’s over the last few years and there hasn’t, as yet, been any sign that the prices are going up just yet. This isn’t to say it won’t happen though. Will we see residuals increase in the next 5 years? I don’t think so but what happens after that is really anyone’s guess.

I can see the Porsche Boxster S becoming a proper classic car in years to come. At the moment, a good example can be picked up for an almost unbelievable price and if you’re not too bothered about the mileage then you’ll be hard pressed to find better value in a car, especially in the sports car niche.

Despite its known issues, such as the IMS problems they are rare to actually occur and if you can find one that has already had this replaced then even better. I used my Boxster S as a daily driver for a few years and loved every moment of it and I’m sure they won’t be so cheap for long so if you’re interested in getting hold of one of these then my recommendation is sooner rather than later!