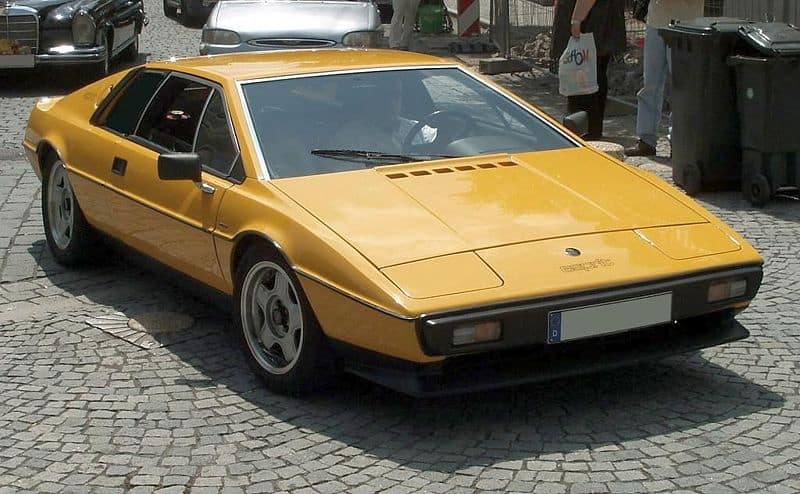 The Lotus Esprit will have been introduced to many of us via a certain secret agent. Bond, James Bond, 007 – licensed to kill. In The Spy Who Loved Me, the infamous white Esprit S1, with fins that appeared to replace its wheels was the first supercar many of us knew and longed for.

One day, I wanted a white Esprit that could drive underwater (I was still quite young, remember!). The Lotus Esprit was (and arguably is) so much more than a prop in a late 1970s production.

It might not be able to transform into an underwater tool, used by the British Military Intelligence. However, there’s still plenty of reasons to own one I can assure you.

This is a question that really needs to be answered for the sake of this article. Fundamentally, the following has to apply to be able to categorize any vehicle as a supercar (also known as an ‘exotic car’):

Some of the above was more relevant in the past. For instance, now, there are many cars that have exceptional performance. For instance, the Tesla Model S has blistering performance, getting to 60 mph (in Ludicrous mode) in a little over 2 seconds.

But, does that make it a supercar? No. Why? It doesn’t look like a supercar, that’s why! It’s as simple as that really. There are many factors involved in defining a supercar and whether they are justified is a subject for another post but this is how people categorize them currently.

What Was The Lotus Esprit?

The Lotus Esprit was produced over a long period of time. In fact, production stretched from 1976 to 2004 – this was from when I was just 5 years old to 33, so you can understand why the car meant so much to so many people. It grew up with a lot of us! Or did we grow up with them? I don’t know, whatever.

There were several editions of the Esprit over this time, as you would expect. For the sake of readability, we’re just going to concentrate on the defining models – there’s plenty of other places online you can find out about individual models.

In total, a little under 11,000 Lotus Elise’s were produced during this time, which isn’t really a lot at all. In fact, Lotus made less Esprit’s in these 28 years than the big manufacturers do in one day!

Production actually started in 1976 (and replaced the somewhat ugly-looking Lotus Europa. The body was constructed from fiberglass and was set onto a steel chassis. It had a 2-liter engine with 4-cylinders and produced around 160 hp at the time. The weight of the car in its entirety was under 1,000 kg (which is around 2,200 lbs).

The S1 Esprit was best known though not for its performance (which actually wasn’t that impressive) but for its handling (as Lotus generally are these days) and many consider that this S1 was the best handling Esprit of the whole range.

The performance of the S1 was 0-60 mph in about 8 seconds and a top speed of just over 130 mph, so about as fast as a shopping trolley going downhill. But a very good-looking shopping trolley.

The Lotus Esprit S2 was produced from 1978 to 1981 which included many changes that improved on the S1’s design and features. The performance was not that much different to the S1 and in 1980 an S2.2 model was released (the only change was a slightly larger engine).

The S3 Esprit made its debut in 1981 (the same year as the first flight of the Space Shuttle, which makes you realize how long ago this was), alongside the Turbo Esprit. Both shared the same chassis and there were various changes made to its looks, both inside and out over the S2. Small changes were made in 1985 and development continued until 1987.

In 1987 the looks changed again and there was an obvious move from the harsh angles of the earlier models to a more rounded and streamlined appearance. Performance was increased to a 0-60 mph time of around 5.5 seconds (depending on who you ask) and top speed was around 150 mph.

Further models were introduced within the range, such as the Sport 300 (also known as the X180R) which got to 60 mpg in 4.7 seconds and had an increased top speed of just under 170 mph. Back in the late 1980s, this was fast.

The S4 Esprit was made available to the public in 1993 and again moved on from previous styling (whilst keeping the original look of the model). The following year, the S4 Sport was released and power output was increased to 301 hp. Top speed was now 168 mph and it had a 0-60 mph time of just 4.7 seconds. The last ever 4-cylinder Esprit was the GT3 in 1996.

The V8 Esprit was introduced in 1996 and two further models, the SE and GT were produced a couple of years later. Reaching 60 mph in 4.6 seconds and with a top speed of 175 mph, this was the fasted Esprit to-date. The Sport 350 is widely considered the ultimate Esprit, only 50 were made and were produced in 1999.

What Was The Best Lotus Esprit?

Generally speaking and perhaps predictably, the best Lotus Esprit was the most recent. The Sport 350 was the quickest and hoped to rectify all the problems that previous Esprit’s have had to-date. However, you’ll do well to get hold of one of these yourself considering so few were made.

Apart from this, look for a V8 – although there were only around 1200 of these made so don’t expect it to be particularly easy to find one!

What Problems Did The Lotus Esprit Have?

It had a few. There’s an old saying that the name ‘Lotus’ stands for ‘Lots Of Trouble Usually Serious’ and although this is certainly no longer the case (as a former owner of three Elise’s I can vouch for them) they did have a bit of a reputation for problems, unfortunately.

However, I think this is a little unfair. If you talk to actual owners of the Esprit you seem to get a different picture to the information that you can pull from social media (usually from people who have never owned one). That said, here are some examples of the issues:

So, you can see there are some issues and indeed there are more than the above. However, are they really that bad to warrant the reputation some people give it? Personally, I don’t think so.

How Much Does It Cost To Buy A Lotus Esprit?

If you’re thinking of buying a Lotus Esprit, and I wouldn’t blame you for thinking about it, then prices can vary depending on the usual variables – age, mileage, and model. Here are some examples so you can get a feel for what you might have to pay out (as of 2020):

There is no doubt in my mind that the Lotus Esprit was, at the time, a supercar. The key part of that sentence was ‘at the time’. These days it would be considered a ‘classic car’.

Although it will always have a very special place in my heart, due to the association with James Bond and the memories of that era, nowadays its performance would be matched by many cheap hot-hatches.

Would I recommend one? Absolutely. But you’ve got to really love them and take good care of them, like any classic car to get the best out of it.

Finally, for those of you that love the Lotus marque – you most likely love the Elise/Exige – but do you know the difference? If not, find out by clicking on the link…