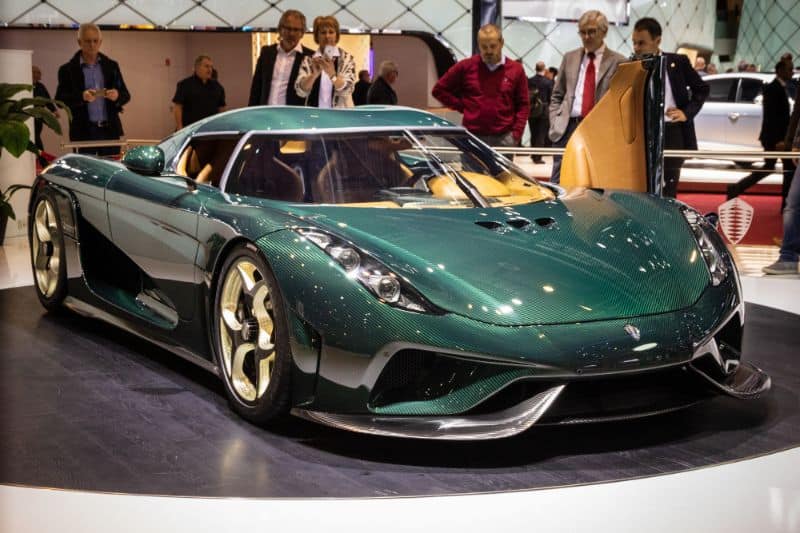 Koenigsegg is a Swedish car manufacturer and was founded only around 25 years ago in 1994. These guys don’t do things quite like other car manufacturers though. Most architects when designing a car will start off with the basics such as, 4-wheels, engine, gearbox, and maybe some nice aero – Koenigsegg seems to throw away the rulebook each time they build something and try and find new, better ways to achieve a better result.

They are not constrained by having to deliver thousands of units every single year. This is not what they are about. They are still a business though and as they have now sold a share of their brand to Chinese company NEVS, they may be under slightly more pressure to deliver more units than before.

The Koenigsegg Regera is not an electric car but a hybrid hypercar – it is powered partly by an internal combustion engine and partly by three electric motors. This gives it several advantages over a traditionally powered vehicle.

What actually is a hybrid car?

A hybrid car is one that is powered by more than one type of propulsion system. What that means is that the hybrid car will have a combustion engine and an electric motor to deliver its power.

This combination of powertrains can mean both positives and negatives usually, so let’s have a look at these:

Positives of having hybrid technology in cars

Negatives of having hybrid technology in cars

What type of powertrain does the Koenigsegg Regera have?

The Koenigsegg Regera has a hybrid powertrain. This consists of an internal combustion engine, mounted in the mid-rear of the car – this is a 5 liter, twin-turbo V8. The electric motor, on the other hand, consists of three YASA (a British company that makes electric motors and controllers) in total.

One of which can be found powering the crankshaft and delivers torque fill-in. The other two YASA motors are situated on each rear wheel. The battery that powers these motors is a liquid-cooled battery pack that weighs over 70 kg which was created by Rimac Automobili.

The car also utilizes regenerative braking using KERS (Kinetic Energy Recovery System) – which, as mentioned earlier, reduces some of the energy lost through braking and basically, puts it to better use.

The Regera’s predecessor, the Agera did not have a hybrid powertrain so Koenigsegg has gone in a new direction with the Agera. It is likely that this choice of utilizing an electric motor for power will most likely remain for future models or perhaps even more likely – their next model will be fully electric.

What is the performance of the Koenigsegg Regera?

It won’t come as any surprise that the Regera has phenomenal performance. The internal combustion engine produces 1,100 hp which equates to 1,115 PS at 7,800 rpm. It has 4 valves per cylinder and has a compression ratio of 9.3:1.

What you’re probably interested in though are the numbers. The Koenigsegg Regera will reach 62 mph (100 km/h) in a vomit-inducing 2.8 seconds. It’s crazy to think that in the time it took you to read that last sentence, the car could have gone from a standstill to 60 mph and back to 0 again.

If you’re wondering how this compares to the astonishing Agera RS then you may be surprised to learn that it is faster. The 0-60 mph time is about the same but when you’re looking at top-end, the Regera will reach 186 mph about 2 seconds quicker than the Agera RS – quite something.

Its top speed is a somewhat lively 255 mph. Well, actually it’s not – it is capable of speeds greater than this but is electronically limited, most likely due to the tires not being able to handle the enormous energy they would need to handle at higher velocities.

The Koenigsegg Regera comes from the same mold as its predecessor, the Agera. It is not only a thing of beauty but delivers almost unrivaled performance. You could describe it as a piece of art and like the best paintings by the best artists in the world, there is a high price to pay if you want one in your garage – around $2 million.

Watching Koenigsegg develop their cars over the last quarter of a century has been fascinating. I may never get the chance to own one (how rich do you need to be to own a $2m car?) but the technological advances they make in the development of their cars help to advance aspects of cars that I may own in the future. I look forward to seeing what the next 25 years brings!

Finally, if you’re interested in supercars then you’ll need to know about depreciation (unfortunately) – check out all the details here.