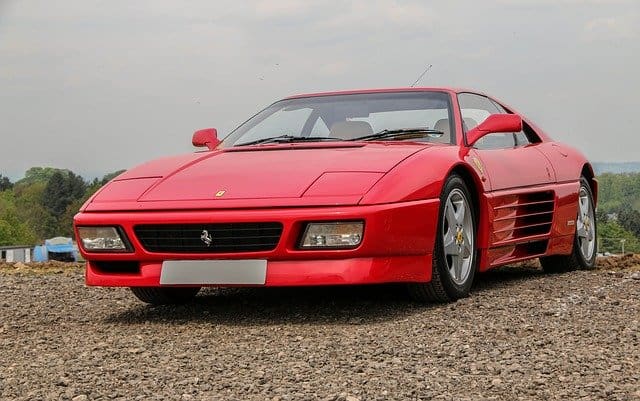 Buying an older supercar has many advantages but also some pretty big disadvantages so it’s good to be aware of these things before taking the plunge.

The Ferrari 348 is no exception to this and you need to know what you’re getting yourself into. If you jump in with your eyes open then you’re most likely going to have many years of rewarding, supercar fun. If you don’t – then you may be in for a surprise or two.

So, is the Ferrari 348 a good car? The Ferrari 348 is a great car! Although performance-wise it is a long way from being the fastest Ferrari, but it has character and is pretty reliable. There are many, many cars out there that are a worse buy than this!

Before we dive into the detail, let’s just take a look at the wonderful Ferrari 348 – what are its specifications? Well, there are many different versions so we are generalizing a little here but let’s take a look.

You may look at that 0-60 mph time and think it’s not the fastest of supercars. Well, no – but then these days there are many ‘hot hatches’ that would put our precious supercars to the sword. But remember, it’s not all about how fast you’re going to get to 60 mph.

It’s the sound of the 3.4-liter engine screaming a few inches behind your ears. It’s about looking at that prancing horse in front of you. It’s the theatre and legacy you’re buying into, not the numbers.

What different Ferrari 348 varieties are there?

As with any model of car, there were a few different versions released and the main differences between these can be found below.

The styling of the 348 captured many people’s attention on release, possibly because of its similarities with the incredible F40, which was actually the fastest production road car at the time.

As for the production run, some 4,228 instances of the Spider (TS) were produced and 2,894 Coupés (TB). When looking at which Ferrari to buy, these numbers are important as (perhaps it doesn’t need to be said) those models that had more limited supply runs are generally more sought after.

The Ferrari 348 Speciale became available only between 1992 and 1993 and only 100 were made, however, this was unfortunately limited only to the lucky US market.

This model produced more power, had a slightly wider rear-end, a somewhat ‘shouty’ exhaust and a slightly different gearbox ratio for its final drive. Predictably, it’s 0-60 mph time came down a fraction to 5.3 seconds.

These weren’t the only changes made to the car. A new spoiler on the front enhanced aerodynamics in a fashion not dissimilar to the F40. There were also some superficial changes, such as a chrome prancing horse and exterior components in the body color.

Inside, its seats were more in fashion with the F40, although the regular seats could still be purchased if you preferred a somewhat more agreeable ride.

In 1993, a new revision of the Ferrari 348 came along. Included in these changes were some small styling differences and slightly more power. The electronics were enhanced with a new engine management system and a single muffler exhaust was standard.

These GT cars came with an enhanced engine (the F119H model) which produced more power than the original. There were small aesthetical changes to the body, such as the engine cover being body-colored.

The suspension was modified which made big strides forward as far as its handling was concerned. Weight was reduced by making the petrol tank smaller, which in my opinion is a bit of a cheat 🙂

The Spider version was also released and 1,090 models rolled off the production line, considerably more than the GTS and GTB.

In 1993, the Ferrari 348 Competizione became available and was more of a track-focused car. For instance, the Competizione had a racing suspension and exhaust as well as a braking system that came from the F40.

Power was not much improved on the latter standard 348 models but only 50 of these were made (42 of which were left-hand drive). Different wheels (5-spoke), enhanced seats, and other weight-reducing additions (or should I say reductions). In fact, the dry weight of the Competizione is 1,180 kg – so quite a difference from the 1,500 kg of the original!

What makes the Competizione so sought after though is the fact that it was such a limited-run model. With only 50 made (and a lot less on the roads these days) this model is rather desirable.

Is the Ferrari 348 expensive?

Well, this is a tricky one because what exactly is expensive? I’m not about to get bogged down in a discussion relating to costs being more for one person than the next so let’s just see how they compare to other cars of this genre.

Typically, the prices of the Ferrari 348 vary between $50k and $90k for the pretty standard TS/TB and GT varieties. It is very rare that you can find a Comeptionale or indeed a Speciale so expect these to cost quite a bit more.

But what would you actually get for the lower end of this scale? For around $50k, you could find yourself in a GTS! However, this car would have done over 50,000 miles (probably closer to 60,000). Also, it will be an earlier model, around 1990.

On the other end of the scale, for $90k you can acquire a GTS from 1992 that has less than 10,000 miles on the clock. So, you see the main determining factors that dictate how much a Ferrari 348 will cost you is its model, year of manufacture, and amount of miles – assuming it is in good condition.

This leads me on to something that you need to be aware of. If you buy a low mileage example and intend to drive it, as you should, you are going to affect the resale value dramatically. If you intend to keep it for many years then this isn’t a problem but if you intend to move on from it after a couple then it could be a big factor that affects your enjoyment of it.

In many ways, getting a higher mileage car makes more sense. It will be less impacted by the number of miles you put on it and the majority of problems that it was going to have (hopefully) – have already been fixed by previous owners!

Finally, if you think Ferrari’s are overpriced – check out my article that will tell you exactly what you need to know!

The Ferrari 348 was not the fastest car on the road. With a 0-60 mph time of mid 5 seconds and a top speed of ‘only’ around 170 mph, it was nothing to write home about. However, there was more to it than this as journalists at the time struggled to match these claimed figures.

So, the 348 isn’t the fastest car on the planet. So what? It’s not about this as I said earlier. It’s about the enjoyment you’ll have driving it in the sunshine and hearing that 3.4 liter V8 growl behind you.

What problems does the Ferrari 348 have?

The Ferrari 348 is getting a little long in the tooth now and there are some things you need to be aware of when getting into this classic supercar from the 1990s. Let me give you some examples.

The above shouldn’t put you off buying, far from it. Like any car of this age you may have some problems but my advice is to get the car professionally inspected before purchase.

Is the Ferrari 348 an investment?

Whether the Ferrari 348 is classified as an investment depends on what your interpretation of ‘investment’ is! If you’re prepared to buy an early model, not drive it but keep it serviced and tucked away in an environmentally controlled garage for 10 years – you will make some money on it.

But…how much fun is that? Besides, there are better investments out there (and less risky ones) than a Ferrari 348. People generally don’t buy these to make money, they buy them to have fun.

It may well be that you buy one and all being well, you sell it a year or two for about the same as what you bought it for – but there are no guarantees!

If you’re looking to scratch an itch and buy your first supercar (or your first Ferrari) you could do a lot worse than taking a look at a Ferrari 348. If possible, I would suggest you consider a later version rather than an earlier one as these were more reliable and are known to have fewer problems. Don’t go for one with a handful of miles on it – these will lose you a lot of money if you drive it as you should!

Finally, one thing I’m going to add to this. With any old cars, they may initially smell a bit…old. If you’re looking for a decent car air freshener – take a look at the link.