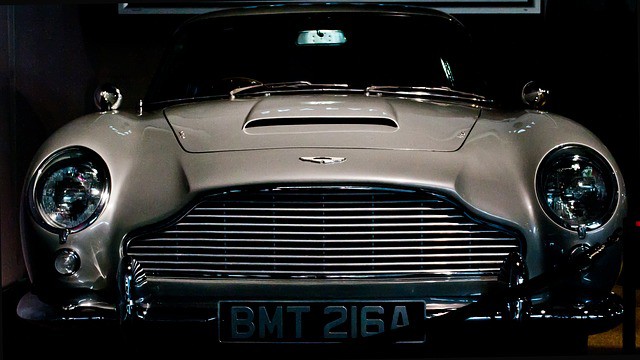 Some things are unmistakeably British: Her Majesty the Queen, James Bond, the red buses, black taxis. What about Aston Martin? Whether it’s the DB5 or DBS V12, the Aston Martin and James Bond go together like strawberries and cream.

Is Aston Martin British? The answer may surprise you.

Aston Martin is a British motor company with headquarters and a manufacturing plant in the quaint village of Gaydon, in the county of Warwickshire. However, from 1991 to 2006, Aston Martin was owned by Ford Motors. During this period their cars were still manufactured in England.

What do we mean by British?

When we talk about a car brand being British, what exactly do we mean? Well, in this case, what we mean is that the manufacturer is based in Great Britain and (if there is a parent company) then this is a British company.

So, we are saying that to answer this question with a yes, cars should be built in the UK. Britain has a fine automotive history, with the likes of Rolls Royce, Bentley, and even the classic Mini showing the world how to make special cars.

However, with these under German ownership (the parent company is now BMW) – although manufacturing continues in the UK, they are no longer truly British.

Personally, what I think is important though isn’t so much where the parent company resides. What matters is where the design and manufacturing occurs and what quality the workforce is.

Aston Martin is owned by Aston Martin Lagonda. Back in 2020, the Canadian billionaire Lawrence Stroll led a consortium to own 25% of the company. Lawrence is still the chairman today. However, Tobias Moers of Daimler Mercedes AMG is the CEO – and it should be noted that Aston Marton source their power unit from Mercedes AMG.

Where Are Aston Martins Made?

Aston Martins are made in Gaydon, Warwickshire which is situated between Birmingham and Oxford in England, about 15 miles from Stratford-upon-Avon which is the birthplace of Shakespeare himself.

The site in Gaydon was a former RAF V-bomber base (just google the Vulcan bomber, it was a fine beast) which finally changed use in 1982. Production in Gaydon started in 2007 after taking over from manufacturing in Newport Pagnell (which hosted production since 1955).

In fact, if you want to see the factory yourself – you can! Not every manufacturer will do does this but for a rather large sum of money, you can have a look behind-the-scenes at their factory in Gaydon. If you’re interested in knowing more about this, you can check out further information on their website (opens in a new window).

Although, if you already own an Aston Martin – the good news is the tours won’t cost you a penny! Here, you will be able to see every step of the car manufacturing process and if you’ve ordered one, you may even be able to see yours on the production line, how cool would that be?

When and where was Aston Martin Formed?

Aston Martin was formed in 1913 in Great Britain. Actually, their first premises were located in Henniker Mews, in Kensington, London. After the first World War, they found new premises in Abingdon Road, Kensington, and here they stayed until 1925 when they moved their operations to Feltham (just West of London).

Production continued until the outbreak of war during World War 2, where they shifted manufacturing to aircraft components temporarily. After the war, in 1955, production moved to Newport Pagnell and it is from this point that the iconic DB cars started to be built.

Operations continued in Newport Pagnell until 2007, where Aston Martin switched to Gaydon, which is where they still remain today. These days, Aston Martin employs around 3,000 people but not all are located in Gaydon, they now have many dealers scattered throughout the world.

Who Has Owned Aston Martin Previously?

Aston Martin hasn’t always been in British hands. In fact, up to quite recently, they were in the hands of US car giant, Ford – but not anymore. Aston hasn’t always had its finances in the black and the company has actually changed hands a few times. Below I have listed the important dates in Aston Martin’s ownership history:

So, as you can see, the past has seen a fair few highs and (arguably) even more lows for this historic motor company. They have been close to the brink (and sped past it) on a fair few times since its conception.

The future is looking a lot brighter these days though and the value of the company is still high, despite a lot of uncertainty related to Britain leaving Europe and the global car industry economies itself.

Does it matter where cars are built?

You can’t help but associate the stereotypical assumptions that are made of the characteristics and personality of that country with the car you’re buying.

When you think about it, it’s ridiculous to form these opinions these days but you just can’t help it. There are both positives and negatives associated with buying a car from any country and it depends on what you’re after.

Eastern European cars used to be known for having inferior quality production and indeed sometimes that can still be the case but nowadays you’re starting to see a lot higher quality and standards generally.

Aston Martin is a fascinating company with a well-documented, troubled past. The association they have with 007 – James Bond, has made this an iconic brand and the cars are sought by fans all over the world, and not just because of the association with Bond, of course.

The quality of their output certainly lives up to the hype and with the partnership, Aston Martin now has with Mercedes AMG to supply their engines (as well as other components) this only makes their output more rounded-products.

Whether Aston Martin will remain British for long is another question. There are a lot of global car manufacturers with a lot of capital and the acquisition of a profitable, British sports car manufacturer (especially one with the heritage Aston has) may well be too much of a temptation eventually.