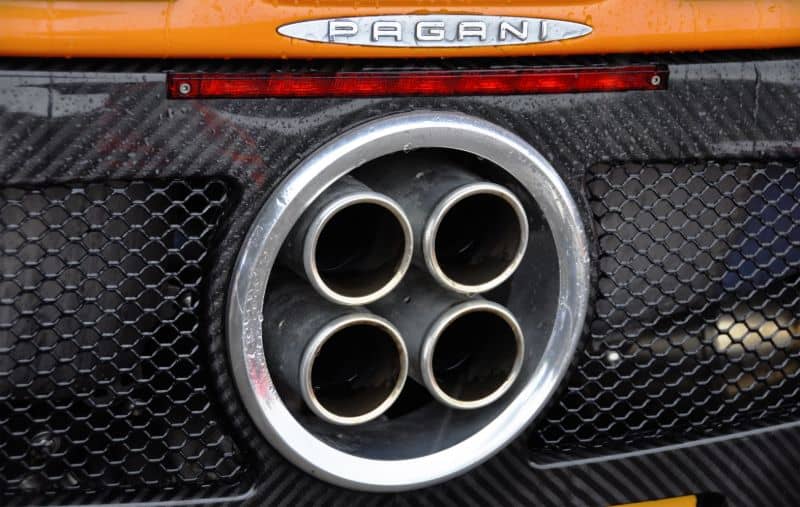 When I was a kid there wasn’t really such a thing as the term ‘hypercars’. For me, the pinnacle of automotive engineering at the time (it was the 1980s) was the Lamborghini Countach. It was cars like this (and the Ferrari F40 and Porsche 959) that were at the very top of car-worship in a young boys’ bedroom.

There are cars in a similar category to the Countach today. Cars like the Lamborghini Aventador and the Ferrari 488 Pista. However, we now have another layer over the top of these supercars, which we know as hypercars.

These are produced in extremely low numbers and have mind-numbing performance figures. Pagani fits very nicely into this category but it’s not always easy to find out what these hypercar manufacturers are up to, so let me help.

Does Pagani still make cars? Yes, Pagani does still make cars. Since early 2019, they have ceased production of their Zonda range and are now only working on one line, the Pagani Huayra, which was first seen in the 2011 Geneva Motor Show.

Pagani was founded quite recently, in 1992 by Horacio Pagani and their headquarters can be found quite near the home of Ferrari, in San Cesario sul Panaro which is near Modena in Italy. Horacio used to work for Lamborghini, managing the department that manufactured the composite materials used on their supercars but after some time he decided to found his own company in the same niche (in 1988).

For some time, he worked with Lamborghini (including performing work on the Countach) but also started designing his own car (known at the time as the C8 Project).

In 1991, Horacio branched out and formed Modena Design as his services were in high demand for his rather unique design and engineering services. Work on his car continued and finally, in 1994, a deal was struck with Mercedes Benz to provide V12 engines to Pagani.

The resulting product was the Zonda Z12 and was first seen at the Geneva Motor Show in 1999 with each car costing a cool $2.3m. Having a car with a price point so high was undoubtedly a risk for Horacio at the time as he was assuming that there would be enough people interested in a car (with zero company history). Fortunately, the gamble paid off and he sold them easily.

Production output of the Zonda continued to increase through the years and finally, in 2007, they entered the US market.

Pagani has actually only ever produced two lines, the Zonda and the Huayra. Below we can look at these lines and the variants in just a little more detail. Although there were also several special editions many were one-offs and we won’t list them here.

The Pagani Zonda, as we mentioned above, was first seen by the general public in 1999 and its looks have hardly aged at all in the 20 years+ since its initial roll-out. Between then and 2019, when production finally stopped, just 140 cars were produced.

That is, on average, just 7 cars a year! As you can imagine, during this 20-year production cycle, several different editions were produced and we’re just going to focus on the more important ones.

Note though that since early 2019, the Zonda is no longer in development by Pagani.

The Zonda C12 was the first model manufactured by Pagani and was powered by a 6-liter Mercedes-Benz V12, attached to a 5-speed manual gearbox. Capable of 0-60 mph in 4 seconds and 100 mph in 9.2 it was incredibly quick for its time, and still would be today.

There were, perhaps surprisingly, only five cars built with this engine and two of those were used for either crash testing and as a press/demonstrator.

The Pagani Zonda S was upgraded to a 7-liter V12 and was specifically tuned by Mercedes-AMG. The ‘S’ was sold with a new 6-speed manual transmission that was needed to handle the increased performance from the engine. The Zonda S got to 62 mph in 3.7 seconds and 100 mph in just 7 seconds with a top speed of 208 mph.

The Pagani Zonda F made its first appearance (at the Geneva Motor Show unsurprisingly) in 2005 and included many changes to previous variants. The Zonda F was equipped with a 7.3-liter AMG engine and production was limited to just 25 cars.

As for acceleration, 0-62 mph was 3.8 seconds and a top speed of 214 mph. A roadster was also developed the following year and production of this was also limited to just 25 cars.

The Zonda Cinque, released in 2009, only had a production run of just five cars (hence the name) and included a new 6-speed transmission capable of incredibly fast gear-shifts. The performance was increased with a 0-62 mph time of 3.4 seconds and a top speed of 221 mph.

Like the Zonda F, a roadster version of the Cinque was produced, again with a run of only 5 units. I suppose the Zonda Cinque has a better ring to it than the ‘Zonda Five’ 🙂

The Zonda Barchetta was produced in 2017 and was one of the last variants of the Zonda line. It was also the most powerful Zonda ever produced. Therefore, as you can probably guess, the Barchetta was also one of the fastest Zonda’s, capable of an eye-watering 221 mph flat-out. Only 3 units were produced.

The Pagani Huayra has now succeeded the Zonda and was first seen at the 2011 Geneva Motor Show. The performance figures for the Huayra are something quite special. A 0-60 mph time of 2.8 seconds and a top speed of 238 mph!

Perhaps surprisingly, the Huayra has a single-disk clutch where most are opting for dual-clutch these days. This choice was purely down to the weight saving that was possible with this route which meant savings of over 150 lbs (>70 kg).

The engine of choice was the 6-liter, twin-turbocharged V12 provided, of course, by Mercedes-AMG, specifically for the Huayra. The starting price for the Pagani Huayra is $2.4m.

Perhaps, rather predictably, the Huarya Roadster was released a couple of years later, in 2017 (at the Geneva Motor Show of course). The biggest change (err apart from it not having a roof) is that the Roadster’s door opens conventionally, unlike the Gull-wing type of the coupé as they would have added too much weight to the car. Only 100 cars were produced in the Roadster variety and of course, they were all sold immediately.

Note that there is also a track-focused model called the Huarya BC and also several Special Editions, which due to their limited production runs we shall not list here.

Watching the Pagani story unfold is of great interest (well, at least to me!) and it’s fascinating to see one company concentrate solely on primarily one model line at a time. It goes to show how much confidence they have in their brand and indeed, they are never short of buyers for this $2.4 million hypercar. Perhaps some people believe that Pagani isn’t making cars anymore as they don’t advertise but actually, Pagani don’t need to advertise.

They have secured such a good reputation for absolute quality and performance that they simply don’t need to. Arguably, their cars are a piece of art and seeing one is extremely rare. Apart from, perhaps Koenigsegg, they are in a different league to the rest.